In one of my previous posts, Becoming Coyote, I mentioned the special space of the fields near the barn where I kept my Appaloosa mare, Jet. This was what I call sacred space, and many amazing events happened there. Not the least of which was the finding of a 6,000 year old blade! It had been raining for a day or two, and the farmer had plowed the soil in the field directly behind the barn. I loved to take walks back there, so once the rain cleared, I pulled on my mud boots and headed out. I was about 50 feet out, past the pasture fence, when something made me stop and turn around (one of those very strong impulses that can only come from elsewhere). I spied an object sitting on top of the furrow of soil – plain as day – as if someone had just dropped it there a few moments before. Imagine my utter shock when I walked back to that spot, picked up the object, and discovered that it was a stone blade! This is why a friend and fellow musician once called me a “conduit” (which broke me into tears).

After that day, I spent countless hours searching the soil. I found many fossils (Indiana was once underwater), stone flakes from where blades and arrowheads were formed, and a 6,000 to 8,000 year old arrowhead with the tip broken off. I absolutely cherish these items! And I’m incredibly grateful to hold the honor of Finder and Keeper. And Rememberer. 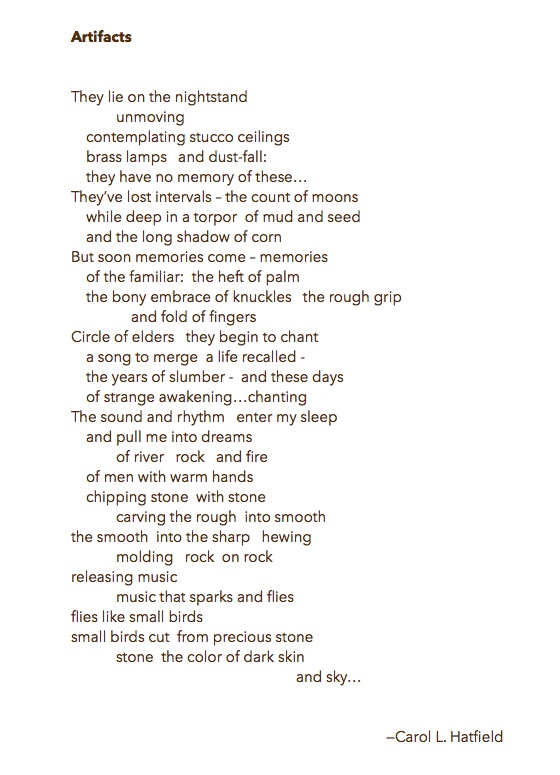 Carol became addicted to the cathartic and highly personal nature of poetry as a child. She has taught poetry writing and appreciation to children and adults, and has had the good fortune to serve as a poet-in-residence for Clark Elementary School in Franklin, Indiana. She has also presented poetry workshops for librarians at the Children & Young People’s Division library conferences, and was awarded “Outstanding Teaching in the Field of Poetry” by the Barbara Juster Esbensen teaching award committee. Carol’s poems have been published in anthologies, journals, and magazines such as Frogpond, Branches, The Journal of Modern Haiku, The Vision, and Cricket. Holding a B.A. in Music, Carol has performed in the U.S., Canada, and the UK. Ensembles to her credit include Shilombish, White Elk, Zionsville Flute Choir, American Crow. As well as being a vocalist, Carol also performs on silver flute, Native American style flute, bass guitar, and bass lute. Also an avid equestrian, Carol is a certified Equine Sports Massage Therapist, and loves to spend time with her mule, Andromeda. View more posts